This post, along with my next two posts, is going to help me explore my thoughts about what qualities make a good leader.

My good intentions have been not to get political on this blog.  I hope to explore these qualities without picking a particular candidate or bashing a particular candidate.  It seems the campaign season here in America has gotten way off track.  It’s become almost impossible to explore what Leadership means much less what kind of Leadership America needs at this time.

Today I’ve chosen a post by Heather Plett @ www.heatherplett.com.   I’d love to hear what you think of Heather’s definition of Leadership and the qualities to look for in that person. 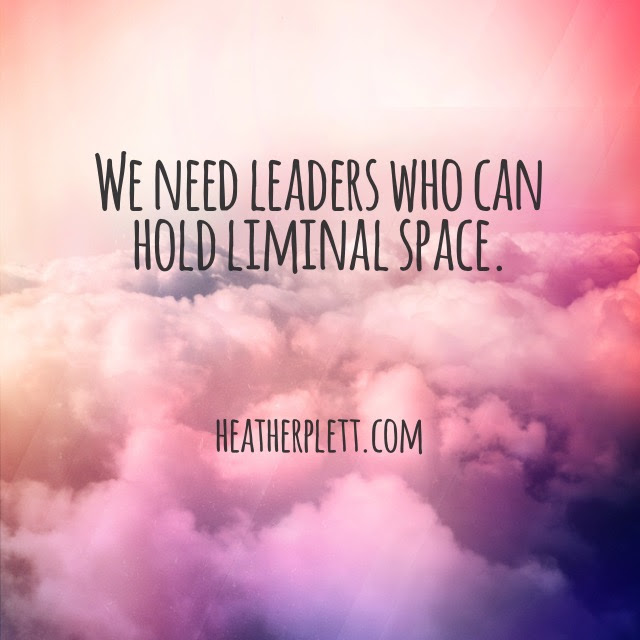 What kind of leadership is needed for our time?
By Heather Plett ~ www.heatherplett.com

“Can’t you just give us clear direction so we know what’s expected of us?” That question was asked of me ten years ago by a staff person who was frustrated with my collaborative style of leadership. He didn’t want collaboration – he simply wanted direction and clarity and top-down decision making.

What I read between the lines was this: “It makes me feel more safe when I know what’s expected of me.” And maybe a little of this: “If you’re the one making decisions and giving directions, I don’t have to share any collective responsibility. If anything goes wrong, I can blame the boss and walk away with my reputation intact.”

I didn’t change my leadership style, but it made me curious about what different people want from leadership and why. While that staff person was expressing a desire for more direction, others on my team were asking for more autonomy and decision-making power. It seemed impossible to please everyone.

I’ve been thinking back to that conversation lately as I watch the incredulous rise to power of Donald Trump. No matter how many sexist comments he makes, no matter how many people with disabilities he makes fun of, and no matter how many small business owners he cheated, his support base remains remarkably solid. As he himself has said, he “could shoot someone and not lose votes”. (I’m glad I’m no longer teaching a course on public relations, because he’s breaking all of the “rules” I used to teach and getting away with it.)

It seems implausible that this could happen, but this article on Trump’s appeal to authoritarian personalities helps me make sense of it.

“‘Trump’s electoral strength — and his staying power — have been buoyed, above all, by Americans with authoritarian inclinations,” political scientist Matthew MacWilliams wrote in Politico. In an online poll of 1,800 Americans, conducted in late December, he found an authoritarian mindset — that is, belief in absolute obedience to authority — was the sole “statistically significant variable” that predicted support for Trump.”

“Authoritarians obey,” says the author of the study, “They rally to and follow strong leaders. And they respond aggressively to outsiders, especially when they feel threatened.”

Authoritarians hold strong values around safety, and they expect a leader to give them what they need. They don’t mind following a bully, as long as that bully is serving THEIR needs for security. Hence the popularity of Trump’s proposals to build a wall on the Mexican border and to keep Muslims from entering the country. They might even put up with some of the bullying directed at people like them (hence the surprising tolerance of Trump’s behaviour among his female supporters) if it means those who threaten them are kept at bay. Take, for example, the times when Trump told security to throw the protesters out of the places where he was campaigning – he made his supporters feel safe because he was roughing up “the enemy”.

Where does an authoritarian mindset come from? According to the article quoted above, there is evidence that it is passed down from one generation to the next. Religious views can also play a strong role. Those who were conditioned by upbringing and religion to obey the authority figures at all cost are more likely to vote for someone who reflects that kind of leadership. If you grew up never allowed to question authority, no matter how illogical or unbalanced it might seem, then you are more likely to have an authoritarian mindset.

There is also a correlation with how fearful a person tends to be. Those who are, due to personality and/or conditioning, frequently motivated by fear, will be more inclined to trust authoritarian leaders because that’s what makes them feel more safe.

Does it matter that some of us prefer authoritarian leadership over other styles? Shouldn’t the rest of us simply adapt a “live and let live” attitude about it and not try to change people? Don’t we all have a right to our own opinions?

Though I am deeply committed to holding space for people in a non-judgemental way (and I tried to create that environment when I was leading the people I mentioned above) I am convinced that it DOES matter. Yes, we should respect and listen without judgement to those who look for authoritarianism, and we should seek to understand their fear, but that doesn’t mean that we should allow their fear and social conditioning to make major decisions about who leads us and how we are lead. That authoritarian mindset is a sign of an immature society and it is holding us back. It must be challenged for the sake of our future.

Around the same time as my staff person asked for more authoritarian leadership from me, I was immersing myself in progressive teachings on leadership such as The Circle Way, The Art of Hosting, and Theory U. These methodologies teach that there is a “leader in every chair”, that the “wisdom comes from within the circle”, and that “the future is emerging and not under our control”. Though these models can (and do) function within hierarchical structures, they teach us to value the wisdom and leadership at ALL levels of the hierarchy.

Margaret Wheatley and Deborah Frieze (two people I had the pleasure of studying with in my quest for a deeper understanding about leadership), in this article on Leadership in the Age of Complexity and in their book Walk Out Walk On, say that it is time to move from “leader as hero” to “leader as host”.

“For too long, too many of us have been entranced by heroes. Perhaps it’s our desire to be saved, to not have to do the hard work, to rely on someone else to figure things out. Constantly we are barraged by politicians presenting themselves as heroes, the ones who will fix everything and make our problems go away. It’s a seductive image, an enticing promise. And we keep believing it. Somewhere there’s someone who will make it all better. Somewhere, there’s someone who’s visionary, inspiring, brilliant, trustworthy, and we’ll all happily follow him or her.”

Instead of a hero, we need a host. A leader-as-host knows that problems are complex and that in order to understand the full complexity of any issue, all parts of the system need to be invited in to participate and contribute. “These leaders‐as‐hosts are candid enough to admit that they don’t know what to do; they realize that it’s sheer foolishness to rely only on them for answers. But they also know they can trust in other people’s creativity and commitment to get the work done.”

A leader-as-host provides conditions and good group process for people to work together, provides resources, helps protect the boundaries, and offers unequivocal support.

In other words, a host leader holds space for the work to happen, for the issues to be wrestled with, and for the emergence of what is possible from within the circle.

Unlike a host leader, an authoritarian leader hangs onto the past as a model for the future. Consider Trump’s “Make America Great Again” slogan. Instead of holding space for emergence, he knows that his support base clings to the ideal of a simpler, more manageable time. It’s not hard to understand, in this time of complexity, how it can feel more safe to harken back to the past when less was expected of us and the boundaries were more clear. Don’t we all, for example, sometimes wish we could be back in our childhood homes when all that was expected of us was that we clean up our toys before bedtime?

But we “can’t go back home again”. The future will emerge with or without us. We can only hope that the right kind of leadership can and will arise (within us and around us) that will help us adapt and grow into it. If not, our planet will suffer, our marginalized people will continue to be disadvantaged, and justice will never be served for those who have been exploited.

In his book, Leading from the Emerging Future, Otto Scharmer talks about leadership not being about individuals, but about the capacity of the whole system. “The essence of leadership has always been about sensing and actualizing the future. It is about crossing the threshold and stepping into a new territory, into a future that is different from the past. The Indo-European root of the English word leadership, leith, means “to go forth,” “to cross a threshold,” or “to die.” Letting go often feels like dying. This deep process of leadership, of letting go and letting the new and unknown come, of dying and being reborn, probably has not changed much over the course of human history. The German poet Johan Wolfgang von Goethe knew it well when he wrote, ‘And if you don’t know this dying and birth, you are merely a dreary guest on Earth.’”

What he’s talking about is essentially the liminal space that I wrote about in the past. It’s the space between stories, when nobody is in control and the best we can do is to hold space for the emerging future. We, as a global collective, are in that liminal space in more ways than one.

This is not meant to be a political post, and so I won’t tell you who to vote for (partly because I am Canadian and partly because I’m not sure any candidate in any election I’ve witnessed truly reflects the kind of leadership I’m talking about – they are, after all, products of a system we’ve created which may no longer work for the future).

Instead, I will ask you… how is this style of leadership showing up in your own life? Are you serving as host or hero? Are you holding space for the emerging future? And are you asking it of the leaders that you follow and/or elect? Or are you still clinging to the past and hoping the right hero will ride in on a white horse to save us?