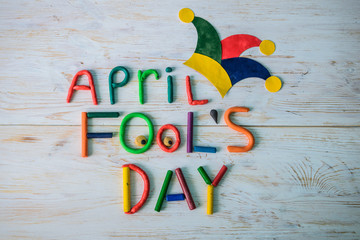 “Many historians believe that this day can be traced directly to the Hilaria Festivals that were celebrated during the Vernal Equinox in Rome. However, since this festival occurred in March, many people believe that the earliest recording of this day came from Chaucer’s Canterbury Tales in 1392.”

“In the United States, people often try to scare, or fool, unsuspecting friends and family members using a variety of different techniques.”

“In Ireland, a letter is often given to an unsuspecting person on April Fool’s Day to be delivered to another person. When the person carrying the letter arrives at his destination, then the next person sends them some place else because the note inside the envelope reads, “Send the fool even further.””

The History of April Fools Day

This past November 2018 I took part in the Nibvember 2018 Challenge.  Day 27 prompt was Lettering and I came up with the design below.  It’s easy to see where my inspiration came from as I’d participated in the A to Z Challenge Lessons Learned in 2016. So, feeling the call to try once again for A To Z Challenge 2019, I decided to sign up for this years using this design as my inspiration.

April World Holidays from A to Z

There still time to sign up!  Here’s what it’s all about: